Along this restoration journey I've had the distinct pleasure of dealing with bolts that break off at the bolt head, leaving you with no immediate way of getting the damned things out of whatever it is that you are trying to extract it from. I've encountered 6 of them so far. The first two were rear shackle hanger bolts, the rear-most ones. The very back end of the Jeep seems to have suffered from quite a lot of water exposure and rust damage.

This looks like a lot of bolt shank sticking out, but it was already extracted.

In the picture above, the bolt had already been extracted, but you can see how deep it goes. There was a 1/2" or so sticking out. I first tried bolt extractors that I got from Home Depot. These were sockets with some reversed blades to grab a hold of the bolt shank and grip it. I'll just say that they were worthless - I might as well have tried to unscrew the bolt with nothing more than my fingers.

Long story shorter, tonight after work, I sprayed the bolts with Liquid Wrench. Actually, I'd done this a few times before with PB Blaster and Seafoam. Anyway, I let it sit for couple of hours, then I heated the bolt with a blowtorch for a minute or two. Next, a small monkey wrench was placed on the bolt shank and clamped down. I then used a 3-foot cheater pipe over the end of the monkey wrench for leverage. Carefully applying more and more torque, I fully expected the bolt to snap off at the frame, but much to my amazement, it started to unscrew! Hallelujah!

Next up - rear seat anchors in the body. Many moons ago, the heads of the front anchor bolts for the rear seat were snapped off. The've been in the body ever since then and they appear to have fused themselves to the welded nuts in the floor panel.

I first tried the monkey wrench approach, but I could not get them to budge. I then applied heat with a blowtorch, then re-applied the monkey wrench. I felt movement, then a sudden release of pressure - the bolt end that was sticking out through the bottom of the body snapped off!

I then started drilling through the bolts. Using cobalt drill bits, I started with a small bit then gradually increased the diameter. After almost reaching the threads, the bolt started to come apart and I was able to pull out the bolt pieces.

The outer shell of some VERY stubborn stuck bolts.

Afterwards, I was able to use a 7/16"-20 tap to re-establish the threads for the front anchors for the rear seat. It really felt good to be able to conquer this challenge. The threads are a tad loose, but they'll do!

Bolt about to break apart.

I forgot to mention...when I thought I was getting close to the threads, I had decided to use an extractor to try to unscrew the remaining bolt. Well, the extractor broke at the very end, thank goodness. I figured I'd just use Vise-Grips to grab it and unscrew it - no luck. The hardened steel shank was too hard and smooth to get any purchase. So, I used an angle grinder and a metal grinding wheel to grind flats on the shank, then used a crescent wrench to grab hold and undo the darned thing. Thankfully, it worked! 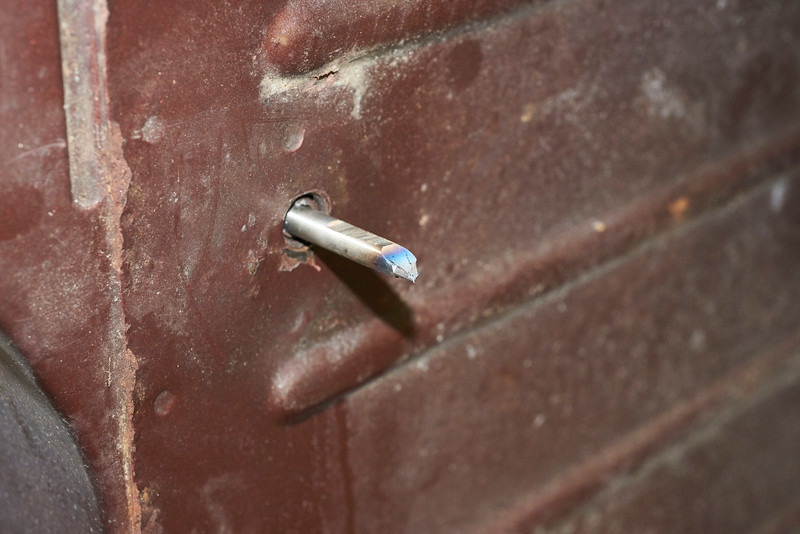 Broken extractor with flats ground on it.

The tap seems to be working.

Previous
Back To Blog Home
Next
Powered by SmugMug Log In