As mentioned in an earlier post, my good buddy has been taking his vintage BMW to a David Carmean in the Richmond, VA area. I spoke with Mr. Carmean and he agreed to take on my 750 GT engine overhaul. He owns a 1975 750 GT and is quite fond of the bevel twins, and knows quite a lot about them.

With a good amount of spare time on my hands today, I spent the day dropping the motor and dismantling some other things on the bike to get things prepped to haul down to Carmean.

When I say "dropping" the motor, I almost literally dropped it! This is not an easy 1-man job. Using a floor jack to support the motor, then a shop crane to lift the rest of the bike, I was able to get the motor mounts free. What I didn't realize was that the motor was not centered on the jack pad, so it started tipping over! Luckily I was able to catch it before it fell over. I envisioned the motor toppling over, hitting the garage floor snapping off cooling fins and gouging the nice flat parts where covers mate with the crank case, ruining the ability to seal oil in. After holding the motor in a very awkward position for what seemed like an hour (it was really probably about 15 seconds), sweating profusely, I used my feet to steady the floor jack, then reached over to work the shop crane. I was eventually able to clear the motor from the frame and get it on firm ground - whew, really dodged a bullet there!

One thing I learned from Mr. Carmean was that it is necessary to remove all side covers from the motor to get it to clear the frame. This only came about through a passing comment as we were about to say goodbye on our first phone call, but it was a very valuable piece of information that I was fortunate enough to remember. They way he said it, I could tell he had experienced considerable trauma in the past attempting to remove the motor with all covers attached. After going through the process, I can clearly see why it is necessary. The forward frame sections have to pass over the crank case, through where the covers are. It looks like they would easily clear the covers, but they won't. Thank you David!

Shifter and alternator covers with their bolts.

Inside of clutch cover and clutch/flywheel assembly. Forgot to take a photo of the outside of the cover.

Some shots of the motor suspended by the shop crane.

In order to prepare the motor for transport, I made a make-shift carrier for it to sit on so that it would stay upright and not move around and shear off the crank case seal on the bottom. This seemed simpler in concept than execution, but I eventually figured out what to do. The motor sat nicely, but would move around even when strapped down, so I screwed in pieces of plywood to box in the corners of the oil sump. Worked out really well. That plus several tie downs and she was secured in the bed of the F150. The motor stayed perfectly still the entire drive down to the Richmond area.

In case you need them, my buddy turned me on to Pro Taper tie downs and they are fantastic. They are very robust and the cam buckles hold really well and don't slip. They are the black ones hooked into the load leveler, and I also used them to cross-tie the motor in the truck bed, but don't have a photo of that.

Continuing on, I took the instrument panel apart to get the gauges out and free the cluster from the wiring harness. Hopefully I can reuse the gauges, housing, and just replace bulbs. 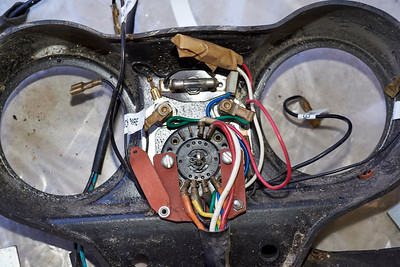 Doesn't look too bad. All of the contacts look really good and the most surprising thing is that the wiring is in very good shape and still quite flexible/pliable.

I also had some time to address the seat pan, which looked like it was submerged in salt water. After an hour with a wire wheel on an angle grinder, there's hope. I think this seat pan is totally salvageable. 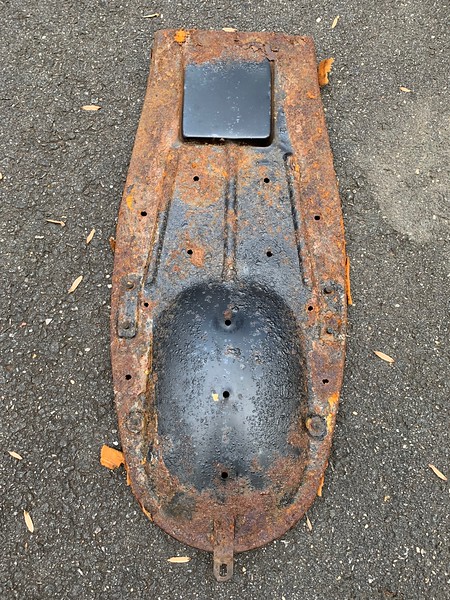 It won't win any beauty contests, but it'll do.

Previous
Back To Blog Home
Next
Powered by SmugMug Log In